What is Universal Child Care?

From trending letters to the editor to campaign stump speeches, the discussion around universal child care—and, more generally, the struggles faced by working parents—is echoing across the nation. We believe these conversations are long overdue. The rising costs of child care mean that too many families are simply trapped.

We need to better understand this debate and the real consequences for families. So, we are breaking down questions we’ve heard from our community: 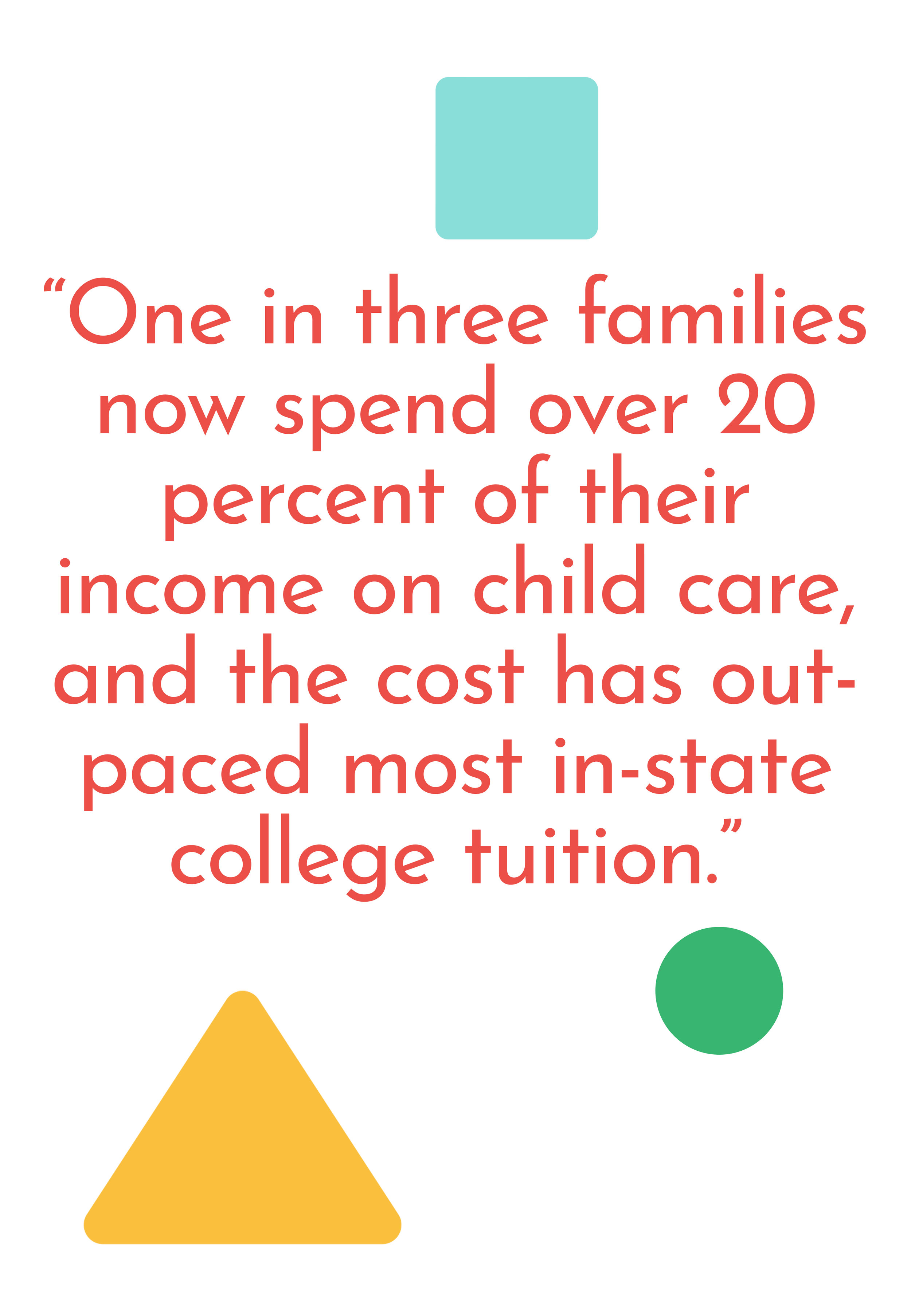 What is Universal Child Care?

In America, local governments provide schooling for children, beginning in Kindergarten. For a long time, our society’s viewed the education of children as an obvious necessity. Still, new research suggests that children would benefit from beginning structured learning at a much earlier age. Access to high-quality child care promotes strong relationships. It also supports vocabulary, early literacy skills, and healthy behaviors. Some politicians and local leaders have presented low-cost and no-cost child care plans for all children, beginning at an early age. Plans vary, but the general idea is to make child care a public service. It’s much the same as our current public school systems.

So is this a new idea?

While this conversation hasn’t occupied center-stage for a while, it’s been a part of a long debate. In 1971, Congress passed the Comprehensive Child Development Act with bipartisan support. The bill would have offered federally funded, high-quality, and affordable child care. President Richard Nixon did not sign the bill under pressure from his constituents, some of whom suggested the program “would diminish parental involvement” in children’s rearing.

More recently, several states (and Washington, DC) have introduced state-financed preschool. Unfortunately, even in states that have instituted a universal preschool program, not all schools have the funding to participate, and restricted hours limit working parents’ usefulness. Only about 28 percent of four-year-olds in the US go to a state-sponsored preschool program.

“Across the pond,” universal child care is very popular, and many countries have long-embraced some form of the program. For example, Great Britain guarantees three and four-year-olds 15 hours of free child care a week for 38 weeks a year, the equivalent of a full school term. In Sweden, where parents get up to 16 months of paid leave after a newborn’s birth, subsidized child care facilities stay open from 6:30 am until 6:30 pm each day—and Denmark and France have similar policies.

I feel like I always see daycare centers—aren’t there lots of child care options?

Actually, there are not as many options as you might think, especially outside of metro centers or in low-income communities. In fact, three in five rural regions lack an adequate supply of child care. And nearly 60 percent of immigrant-Americans live in areas with an undersupply of licensed child care.

Even in places where there are child care options, the cost can be staggering. The average cost of annual childcare in America is nearly $11,000 per year and soars much higher in some states (the average cost of a nanny in Massachusetts is $34,500 a year!). One in three families now spend over 20 percent of their income on child care, and the cost has outpaced most in-state college tuition.

If I don’t have children or have older children, why does this debate matter?

There are a lot of rippling benefits to offering universal child care. In America, the burden of child care still falls heavily on women. That’s despite them earning more college degrees than men and accessing more advanced career opportunities. As a result, a lack of affordable and convenient child care options disproportionally affects women’s ability to pursue career goals. According to Slate, there is an 80 percent maternal employment rate in France, where universal child care is offered, versus 60 percent in the United States. Options like universal child care or other subsidized care programs might reduce the family-career conflict that many women face. Plus, it could improve gender representation and wage-disparity in the workforce and strengthen our nation’s economy.

Government funding for daycare and preschools would also help to increase the compensation provided to teachers. Early childhood educator earnings are among the lowest for any major occupation: child care workers earn 30 percent to 60 percent less per hour than kindergarten or elementary school teachers. If our society commits to quality education, it’s crucial to inspire talented teachers to pursue careers in early education and fairly compensate them for their important work.

It’s promising to see leaders recognizing that child care is a serious issue for families, communities, and our workforce. But with a divided Congress, passing a comprehensive child care bill would be a complicated and contested process.

Even without federal support, though, there are still opportunities to fix our broken system. At NeighborSchools, we’re helping passionate educators pursue their professional dreams while also providing quality child care options families deserve. These providers choose to open a child care program in their own home, earn fair compensation for their hard work, and infuse their community with dedicated and reliable care.